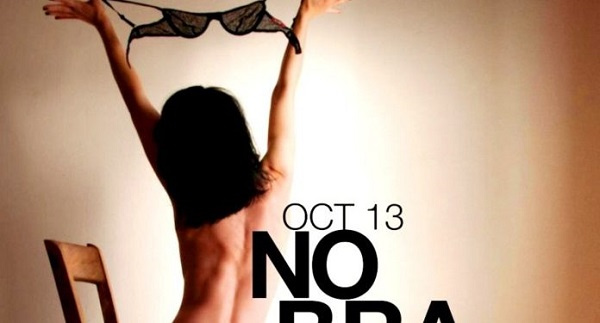 Freedom is the most wanted status around the world. Freedom has many manifestations and now NO BRA movement is one of the self-claimed flag bearers of freedom. Free boobies are good boobies! With slogans like this, today thousands of No Bra activists celebrated their day, No Bra Day, around the world.
Are you wondering what is this No Bra Day?
Here are the 7 interesting but rarely known facts about one of the most controversial gender-based celebration days: The No Bra Day.

1. Breast Cancer and No Bra Day

No Bra Day is an annual observance on October 13 every year on which women are encouraged to go braless as a means to encourage breast cancer awareness.

2. Initially No Bra Day was not observed on 13th Oct

No Bra Day was initially observed on July 9, 2011, but within three years it had moved to the 13th day of the National Breast Cancer Awareness Month, October.

3. History of No Bra Day was Bra Day

The original event known as BRA Day was celebrated by Toronto plastic surgeon Dr. Mitchell Brown. The first BRA Day, meant “Breast Reconstruction – An Evening of Learning and Sharing”, was held in Toronto, Canada at Women’s College Hospital and Toronto General Hospital on October 19. In July that year, an anonymous individual using the name Anastasia Doughnuts conceived of No Bra Day and published the first website to promote the event. That’s how it all started.

4. Personal is Political: No Bra Day has roots in gender politics

Bras have irritated women for so long. Women have protested the physical and cultural barriers characterized by bras over many decades. In 1966, two women students at San Francisco State College protested a legal bill that would require women to wear bras. They walked topless near the campus.
On August 1, 1969, an Anti-Bra Day was declared in San Francisco to protest societal pressure to wear constrictive, feminine garments. The protest drew large crowds, blocking traffic, and a few women took their bras off from under their clothing.  A section of the press gave it favorable coverage and called it a No bra revolution.

5. Social media and No Bra day: A tale of male teacher disturbed by braless student

The first No Bra Day event
was created by an anonymous internet for July 9, 2011, and was observed on that date through 2013. In 2013 and 2014, social media posts announced both July 9 and October 13 as No Bra Day.
The announcement was later reposted on a Facebook group named “No Bra, No Problem” which grew to over 1,200 members. The group was started by teenagers. Montana high school principal’s treatment of her friend who was summoned to the office because her bralessness had “disturbed” a male teacher.

6. Actresses who came out braless in support of No Bra Day.

The movement has a major celebrity endorsement, including Kendall Jenner, Miley Cyrus, Chrissy Teigen, and Rihanna, who have let their bodies free by leaving their bras off or coming out topless. Indian film industry Bollywood also lent its support to the movement and many celebrities like Parineeti Chopra, Tapsee Pannu, Sonam Kapoor are the ones who have dared to break the ‘Bra Norm’.

7. 29 Billion USD World Wide are being earned by producing Bras.

Bra manufacturing industry has a volume of 29 billion dollars which according to market analysis will grow at the rate of 7% annually. Most demanded bra styles had been push-up bras but after Covid-19  sleepwear, activewear, and loungewear Bras are emerging as the darlings of pandemic dressing.

Types of Fishing Reel: Key Differences and Pros / Cons of Each

Is Blender Better Than Maya for Video Editing?

Poll: What is Vaccine Passport & Why Are There Enormous Protests Against it? 4 Major Points